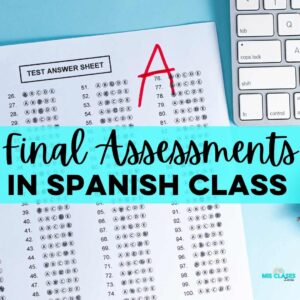 It is that time of year again when everyone is trying to figure out how to assess their classes. Many schools are down to the home stretch, especially if you happen to be done before Memorial Day, like many small-town Iowa schools around here.

Here were my tentative plans for the classes I was teaching the trimester this was posted. I wrote a post earlier about my Curriculum. At the time this post was published I was teaching using trimesters, with a plan to move to semesters the following year. Due to that, there was an extra elective class to fill in at the time. At the end of that school year, I was teaching 8th-grade Exploratory Spanish, Spanish 1 Culture & Civilization, Spanish 3, and Spanish 4.

Since this was posted a few years ago, here you can see my most updated curriculum in this blog post. 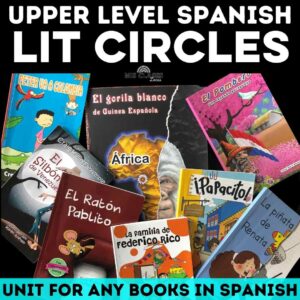 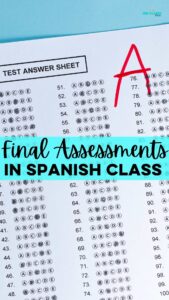 At the time I originally wrote this blog post, you can see I used a lot more project-based assessments. Once we switched to Standard Based Grading, I moved more towards assessments by mode.

If you are teaching a novel, check out my many blog posts for specific novels, plus How to Assess a Novel in Spanish class. I would grade both the speaking and writing below using a proficiency-based rubric.

Plus, check out Differentiation in Spanish Class for more ideas.

If you are not required to give a cumulative final, do an assessment over your last unit. Then use 10 Appropriate movies for Spanish class to find a film that relates to your class to show to wrap up the year. Or you could compare a film to a unit or book you used recently. Or Take your Spanish class outside & do something fun, like these games, or talk about your future plans for summer to end the year together.

More Resources for May