Inside: A no prep way to get your students speaking in Spanish the whole class period.  Rotating Partner Conversations in upper level Spanish 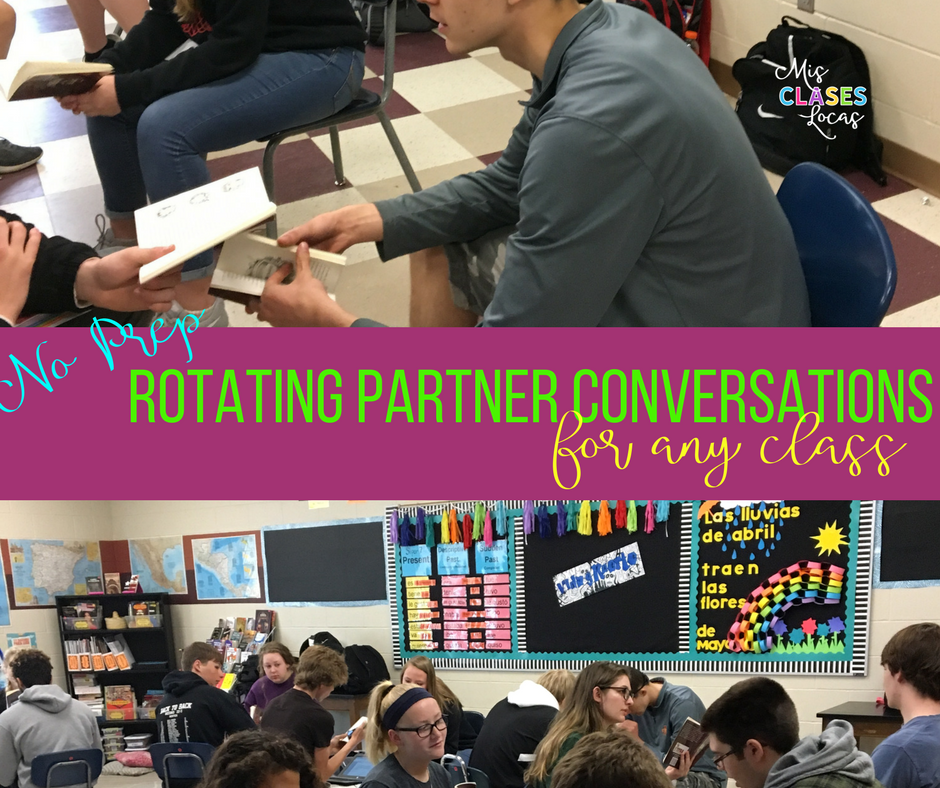 Hey, hey we made it to May! Is anyone else feeling teacher in May exhausted? I think we can attribute it to all of the end of the year events, award ceremonies, graduation parties, concerts, finals, planing for next year, and more. At the same time, I know I have those classes that have just plain given up. With nice weather and late night track meets, my first hour is not there mentality, and that is if they even show up to school. But, today I had a ray of light in that class and with a last minute idea with 0 prep on my part they spent 40 minutes speaking in Spanish!
For some background information, I did this activity with my Spanish 3 students, who just finished Vida y Muerte en la Mara Salvatrucha. Wednesday they finished the book and as a last minute something to do after reading, I told them to describe the symbolism of each of the 16 chapter’s chapter artwork (an idea from the back of the book). They were to be prepared to for discussion Thursday on the symbolism of each chapter. In reality my plans for Thursday just said “review book with interpersonal,”and I just came up with what we did on the fly.
On the day of the discussion, we moved the chairs into pairs. (We ended up with one group of three due to an odd number). Students were allowed to use their books and symbolism notes, since this was formative practice and I wanted them to be able to cite evidence to back up their justification. I also was more concerned with getting them to speak and did not want them to run out of things to talk about if they had an unprepared partner.
I set a timer for 4-5 minutes and students just talked about the symbolism of the art in chapter one and two. They also just talked about the chapter in general, which was fine by me as it was a great review for everyone involved and they were staying in Spanish. When the timer went off, students rotated and then talked about the next two chapters. To be honest at first I did not even set a timer, because I wanted to get a feel for how long they could go and then rang a timer when the conversation seemed to die down. While they talked, I walked around with a clipboard of their names, taking a few notes. (This helped many stay on task in Spanish, and they may have even thought they were being graded). They talked with eight different partners, which helped to keep the conversation fresh and provide a variety of different levels of speaking partners.
Overall I was SO PROUD of this class for staying on task in Spanish for that long. It was an excellent review for those who have missed class as well as helped them dig deeper into the symbols and deeper meaning instead of just superficial comprehension questions. It was very little work for me and did not require preparation in my part. I got to save my own voice and energy, as they did all the work!
Variation Ideas
Other Novel resources you may enjoy 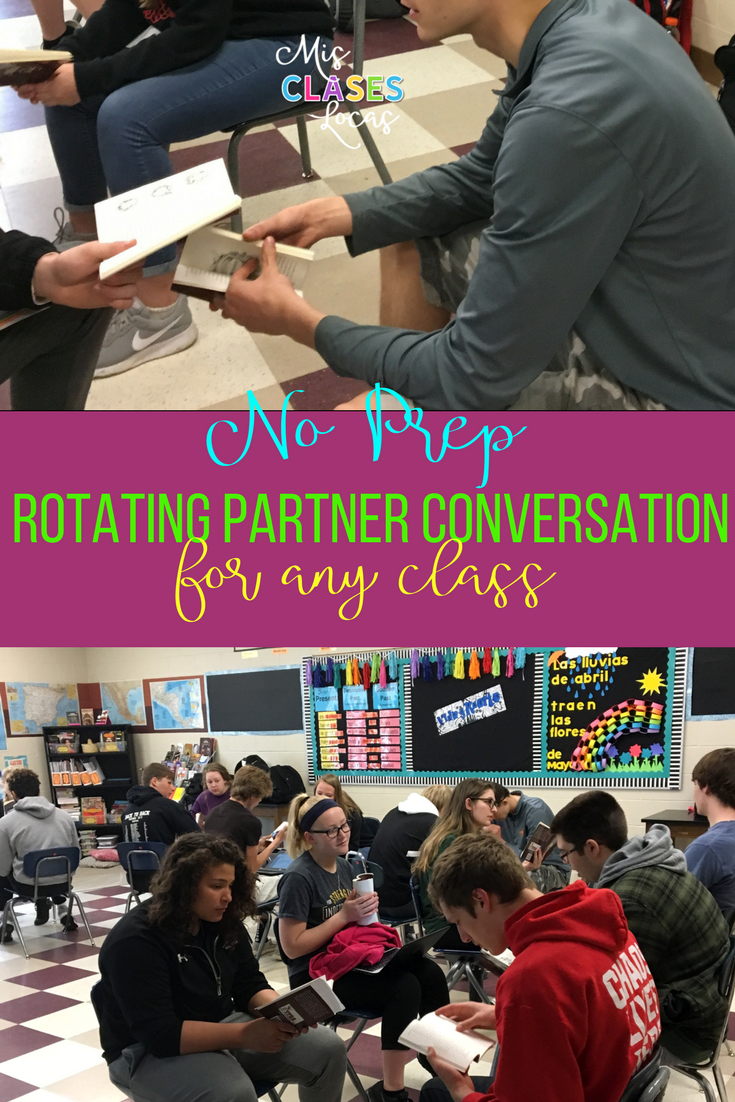 Have you done something like this? How did it go?
What are other ways that you can sit back and let students do the work?
More Interpersonal Speaking Ideas
« libro lunes: La isla más peligrosa
GimKit in Spanish class – Gim Kit »

Update! The final resource is done! www.teacherspayteachers.com/Product/Hispanic-Heritage-Month-Spanish-Music-Madness-7-NEW-2022-Bell... Want a chance to have a voice in the 1 song from each Spanish-speaking country fall HHM music bracket? Suggest as many songs as you would like! >> forms.gle/vtXjN5YuopGL16be9What songs are you hoping will be included this year? ... See MoreSee Less

I don’t think I am emotionally ready for the #ThisIsUsFinale

✨Easy Post Reading Choices ✨ Are you end of t

✨Happy Teacher Appreciation! ✨ I am excited

Who wants to hang out & learn & grow together in p

✨ Updated Syllabus Alert ✨ If you have my syl