My Spanish IV class is just starting the great novel La Calaca Alegre by Carrie Toth. To begin we had a wonderful guest speaker from Mexico. We also completed a fun little activity about identity, a main theme of the novel. I got the idea from the awesome TPRS Teachers Guide to accompany the novel. These guides are worth their weight in gold and make teaching a novel for newbies like me so much easier.


Last week we had state testing, so while proctoring I had some extra time to prepare for my Spanish IV. Normally they are my fifth straight class in the morning with no break (after 2 Spanish II & 2 Spanish I) so some activities have a tendency to be thrown together for this class. It was nice for a chance to start fresh with this as my first class that day. I knew I wanted to start with a picture of myself to talk about my identity, but then found some old embarrassing high school pictures of myself I had taken pictures of and decided to use them as well. I did not do anything fancy but just put them together in a Keynote with a few keywords that I would have used to describe myself while in high school.

As the students came into class I had the slide above posted and you should have seen them crowded around my board trying to find me in the group pictures and laughing at my hair and fashion choice for my Freshman Homecoming. I spent some time in the target language describing my identity as a high school student. I then switched to the slide below and talked about my identity now. It was great to be able to compare and contrast how I saw myself then, and how I see myself now.

It was then time to move on to talking about their identity. In the slide below I asked them to put together some pictures and words on a document or slide, that they think describe their identity now, as a high school senior. I know there are many fancy tech tools we could have used to do this, but the focus of the lesson was not about them creating, but rather communicating about themselves. The students had fun finding their favorite pictures of themselves and their friends to put together. 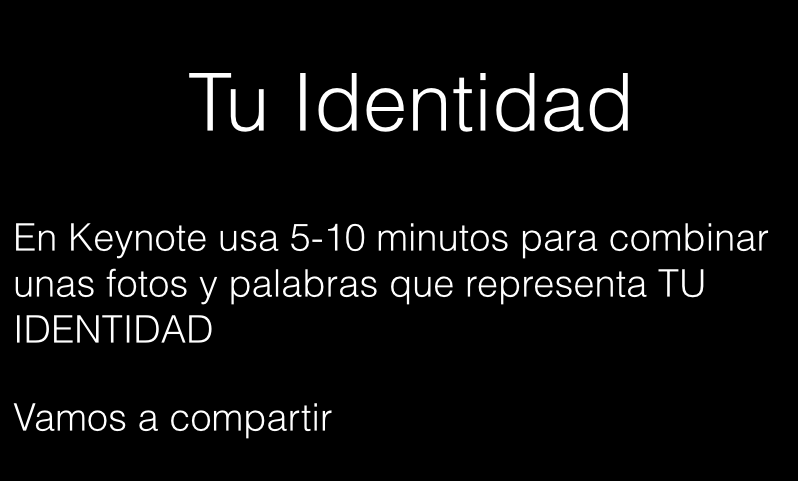 After about 10 minutes I had the student share with their tables about how they see themselves and their identity, and the others were supposed to ask questions as well.
I then asked for volunteers who air played (we have Apple TV) their slide up and described it to the class.
It was a great segue into introducing the novel, as well then discussed the main character and completed the pre-reading discussion questions. How do you introduce a novel?
More Blog posts about using La Calaca Alegre in Spanish class
« Heritage Spanish Guest Speakers
Trivia Crack in Language Classes »