Since I am a #deptof1 and the only World Language teacher in my district, I get to be with the English teachers for our PLC time at school. This is actually amazing, since we all teach using novels, there are so many ways we can collaborate and share. I have learned a lot about teaching with novels from the great English teachers at my school. At one of our recent meetings, the awesome junior high English teacher talked about a technique she used in her class for interpersonal speaking called a “fishbowl.” I decided this was something I would like to try out and then did some research. 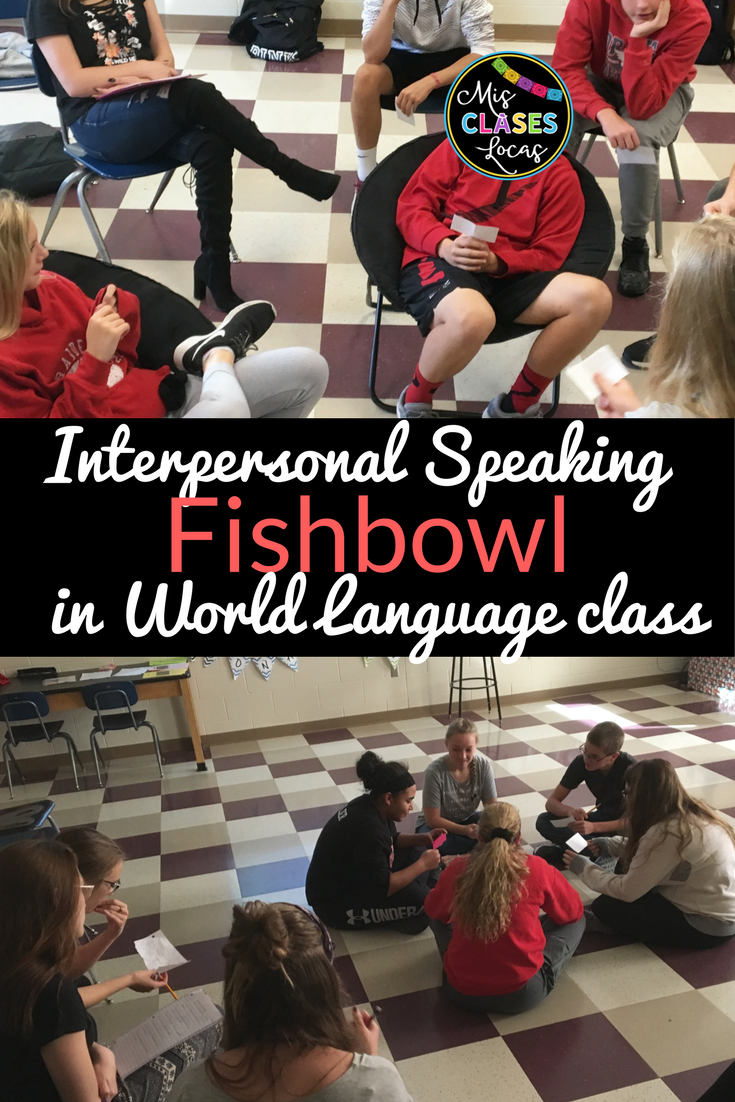 Fishbowl Interpersonal Speaking – A group of students in the center “fishbowl” speak on a certain topic, and the rest of the students on the outside listen. Students rotate in, so everyone gets a chance to talk.
From my online findings there were multiple teacher posts about how to implement such a discussion, but there were not any that were World Language specific. I like the instructions in this post and the image in this post as a starting point. Here is how I implemented an interpersonal Fishbowl discussion in Spanish 2.

My overall goal was for students to talk to each other about immigration relating to our unit including: the novel Esperanza and the films Which Way Home and La Misma Luna (using this resource). It is actually helpful to have a topic that has a little bit of debate involved, to make it more interesting. At the same time it is important to establish a class culture of respect and understanding.
(On another note, this particular class has done an Awesome job discussing this sensitive topic this year. As opposed to two years ago, when I would have not attempted a fishbowl discussion  for this unit since I was scolded by both parents and students for “pushing my political views” by bringing up immigration).

Have students prepare to discuss

Students were told to prepare a note card of open ended questions to ask in SPANISH. We spent some time working on questions the day before and they were to come to class the day of the fishbowl ready to talk. I even gave them time at the start of class, to make sure they felt confident and had something prepared. We worked on wrting open ended questions, so instead of specific things like “What is the name of Esperanza’s husband,” a better question is “compare the immigration for Esperanza and Carlitos (in La Misma Luna).” It helped me realize we need to keep up the skill of creating questions.
Some students were not as prepared as I would have liked them to be. In the future, I would have students submit questions in advance, so we could compile a master back up list of great questions.

I was very open with the students that we were trying something new together and I was not sure myself how it would go. I decided to have 1/3 of the class in the inner circle in the fishbowl and the other 2/3 on the outside. (Another option is to do half and half, with each person evaluating a specific partner. I chose a 1/3, since I wanted to make sure it was a focused discussion too many extra people).
With my deskless room, this was quite easy to physically set up. One class moved the comfy chairs to make a small inner circle, and the regular semi circle of chairs was the outer circle. The other class was so ready to get started, they plopped right down on the floor to create the fishbowl.
The expectations below were projected on the board. I had them in English, so everyone was very clear what their job was. Since it was my first time our “tag in” was very informal and if someone wanted in the conversation, they just placed a hand on the shoulder of who they would replace. Usually once one new person went in, a whole new group would join in. 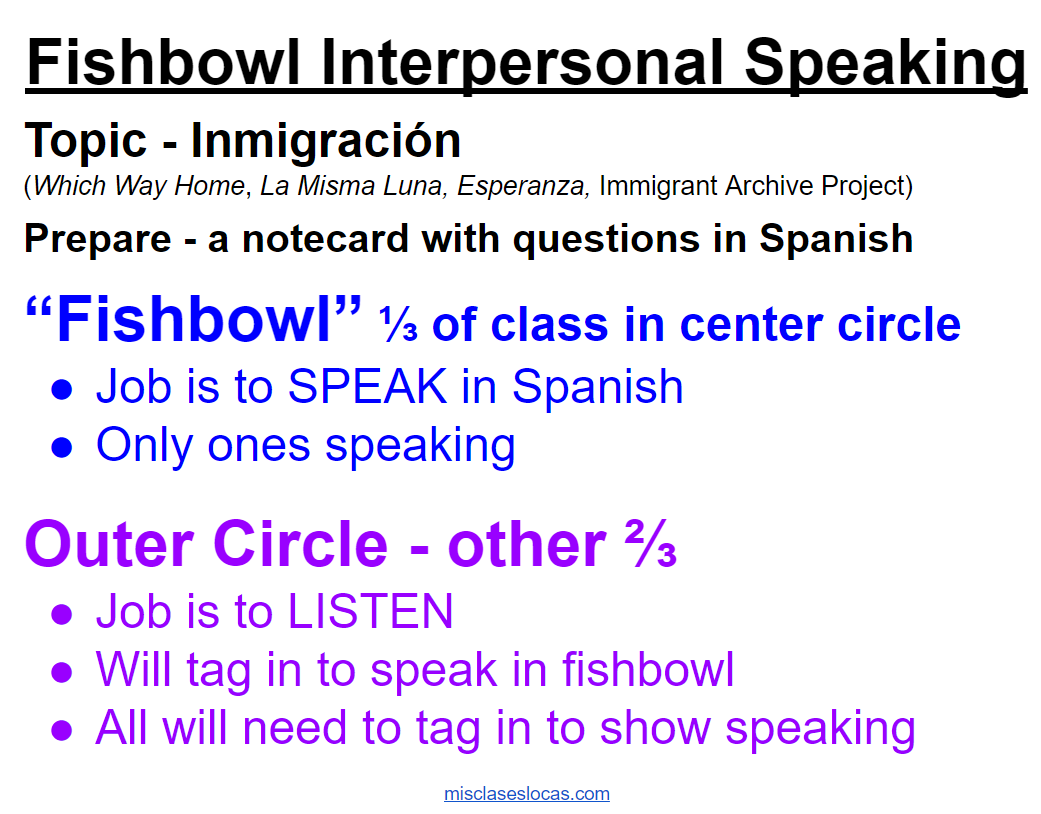 While the fishbowl went on I just sat at my desk and listened. A few times I intervened if there was an obvious miscommunication, such as someone brought a question that they created with the help of a translator. I think that having students submit questions in advance would help alleviate this problem.
I did have the expectation that a question could not be repeated, so everyone had to listen the whole time as well, even if they were not in the fishbowl. Towards the end it was evident the outer circle was not paying as much attention to the middle as they should, since they were trying to come up with more questions. Having some ready to go extra questions typed up, and cut into strips would help out with this.
I really loved when a student had something to say on a topic and was on the outside. It was great to see them tag in to get to speak in Spanish. I just wish I could get that kind of engagement all the time!

I was amazed that we spent about thirty minutes completing this activity completely in Spanish. I just let them go as long as they could. Even though many were basic novice level questions, they were using the language to talk about something real and building confidence. They were very proud of themselves and how much Spanish everyone used.
I was a proud mama bear at how even those students who are not big supporters of immigration, discussed how they have compassion for children and refugees in certain situations. To me, building this empathy for others is so important, and I was very pleased with how positive the whole discussion was.
On a management side for me, completing this activity in the future, I need a better system of accountability. It would be helpful to have simple tally marks or check boxes for students to self and/or peer evaluate how many time each person asks a question, responds, adds a supporting detail, or helps drive the conversation. This would help students realize if they are dominating the conversation, and to try to encourage them to specifically ask the opinions of those who do not volunteer answers as easily.
Overall, I am glad I tried something new and at the end both sections asked to do a fishbowl again!