If you are a Spanish teacher mom who uses the Kids account on Netflix, you might have seen the new Netflix film El camino de Xico (Xico’s journey). This cute animated movie is everything Spanish teachers want: culture-rich and appropriate! It takes place in Mexico and was originally released in November of 2020 in Spanish in Mexico. It follows the story of two young kids and a Xolo dog, with deep themes of the environment. You can see more in the trailer below.

Who would you use the film for?

The film is rated TV-Y7, which means it would be appropriate for ages seven and up, and is very G rated. It is 84 minutes long. (This means it would be a great sub plan with this guide!) You can find more about level of appropriateness here, with mentions it does have some mild violence (between animals and humans, machines and mother nature), but is pro-nature. I personally think it would work with 2nd grade on up Spanish class or even an Exploratory class.
At the same time, there are themes of the environment, including fracking, which would make for great high school or college level discussion with units on El medio ambiente, global challenges, and climate change. It is an authentic Spanish movie from Mexico, that is very appropriate, yet could go as deep as you want with relevant themes.
If you want to make a whole film unit, there are so many cultural themes for exploration including the following:

Resources to save you time

El camino de Xico Guide – BRAND NEW! Includes options for English comprehension or Spanish comprehension, character description and post-viewing activities. The directions are in English, so it would be a great sub-plan.

Use these #authres videos to introduce the film. For novice students, you could movie talk muted trailer. You could then do a deeper study of the authentic song in the film.

This last #authres video would be great for upper-level students as it is the voices of actors talking about films, going to the movies, and El camino de Xico. You could watch it before or after the film.

Use these #authres readings in Spanish after the film as reading assessments or just extra reading practice for upper levels.

Article with lots of pics 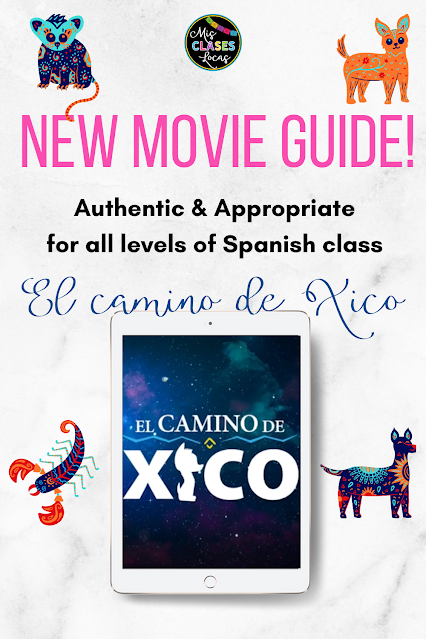 If you are interested in MORE movie guide activities, check out this blog post with more information about all of my appropriate favorites. The other guides I have available are:
Please let me know if there are more resources I should add!
« Diverse Book Recommendations
lista lunes: March in Spanish class »

If you need to spice up a cold Friday & get the blood pumping, try dancing! >> misclaseslocas.com/baile-viernes/What are the favorite songs in your class? Please share! ... See MoreSee Less

It’s officially why do I live here season

✨Reminder ✨ This year is hard you are doing th

Dreary Winter much? ✨Time for a fun music bracke

✨What to do the first day back from winter break