What is Señor Wooly?

Señor Wooly is a website for Spanish teachers with comprehensible music videos. It also has tons of ready to go worksheets and online activities. Sr. Wooly is a great sub plan or supplement to an acquisition-based curriculum.

How to get started with Señor Wooly

This year I tried a few new (to me) things. The one that I honestly can not believe that I had not used before is Sr. Wooly. Sure, as a Spanish teacher I had heard of Sr. Wooly and seen a couple of his videos on Youtube, but I had not yet drunk the kool-aid. I did not get what the fuss was all about. Last year when I had curriculum money to spend and posed the question of what to buy on Twitter and some Facebook groups, many people mentioned a subscription to Sr. Wooly Pro. We only get money every six years, so I went all-in with a six-year subscription. I AM SO GLAD I DID! 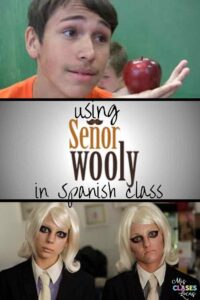 
Even though I had the subscription, since I had no idea yet how to use it in class, it was not a part of my curriculum plan. I started the year on maternity leave and felt like I was playing catch up all year to make up for my students missing ten weeks of CI. The opening for Sr. Wooly came in my 8th grade exploratory class last fall. I did not want to move ahead, since the other section had the sub, so we were freestyling, spending most of the class on Special Person Interviews.


To mix it up one day I pulled up Sr. Wooly and the song ¿Puedo ir al baño? We watched the video as a class and I had them try out the “nuggets,” since we are 1:1 with Chromebooks. They loved it and started watching the other videos on their own and recommending them to me. For the last couple of weeks of class each day we spent the first half of class doing Special Person Interviews and the other half doing little Sr. Wooly units. In that class we also did Es una Ganga, Las Excusas and Guapo.

With that first class, I did not fully utilize the supplementary activities, puzzles, games, or readings that come with the teacher pro subscription. I also kind of forgot to try it out with any more of my classes. Fast forward to early February and I am bombarded with Wooly week on social media. I showed my first hour of Spanish 1 the brand new No Lo Tengo song to participate in the Wooly raffle and then decided to drop my original plan for the week and go all-in with Wooly week. We watched the three new videos that came out and completed tasks for the raffle. Also, we set up their Pro accounts and did a unit with No Lo Tengo. They loved the catchy song, differentiation,  and change of pace from stories and novels.

Spanish 1 begged for more and is ending the year doing units on Es Una Ganga and Guapo. Now that I am more familiar with the site a typical unit is as follows:

I typically plan for about a week for a unit, but it also varies with song and level. For example, Es una Ganga has very little vocab and is a very quick unit. (It is also a favorite with the creepy Ganga girls).
For more ideas, especially ready to go slides for distance learning, make sure to join the collaborative Woology Facebook group.

Spanish 4 was late to join the Wooly party and did a unit with the new song Amnesia as an introduction to their La Calaca Alegre unit. It worked great with the theme of Identity. They are sad they missed out on Sr. Wooly their past years and are always caught singing it in the hallway. Just last week Spanish 2 finally got their chance and also did Amnesia. To say they love it is an understatement. I have been told by other teachers that my students are obsessed with this black and white Spanish song, and I caught one blaring it on her Chromebook down the hall during passing time.

As I work on my curriculum plan for next year, I am working to intentionally plan Sr. Wooly units throughout the year. This Facebook group, Woology–Sr. Wooly Teachers & Fans, has been an awesome resource for all things Wooly. If you are on the fence and wondering if it is worth the money, GO FOR IT!

Do you use Sr. Wooly in class? How? What are your favorites and how do you use them?