The first book I ever taught as a Spanish teacher was the authentic novel Cajas de Cartón. It was my first year teaching, I had not yet learned about comprehensible input and we were using an ancient textbook as a curriculum. I had always wanted to teach a novel in Spanish, so I picked one of my favorites and ran with it. Let’s just say I now feel horrible for my first group of Spanish IV students. I expected them to read entire chapters of an authentic novel outside of class while answering a full page of comprehension questions in Spanish. They STRUGGLED, yet I forced them to keep moving forward. The high flyers were spending hours a night trying to read and translate a text that was too advanced for what they were ready for. The others just flat out gave up or resorted to reading the English version of the text online. Even though it was a big flop, it taught me a lot about how I wanted to teach the novel moving forward.


Two years later I taught the novel Cajas de Cartón to a group of Spanish IV students who were ready. They had read two previous novels that year and I knew a lot more about teaching with novels. I also got the amazing full book teacher’s guide from Musicuentos. It went So much better. This time the students had the foundation of high frequency words, plus the support of the glossary from the teacher’s guide. I was very pleased with how it went overall.


Flash forward two years and I am at a new school with students with who I am transitioning to learning with comprehensible input. My current Spanish IV class has grown leaps and bounds, but since they started with a foundation of grammar taught in English, we are still working on their foundation with CI. I knew I wanted to use Cajas, but instead of dragging them through the whole novel, I decided to do just the short story (chapter 9) with the same title, Cajas de Cartón. I used the short story as the center of a unit with more of a focus on the agriculture side and migrant farming. This is a theme that is easy to relate to students in a rural school in a town of 700 where the majority have spent time working in the fields detasseling, picking up rock, or just working on family farms.

The main elements of our unit were the following: 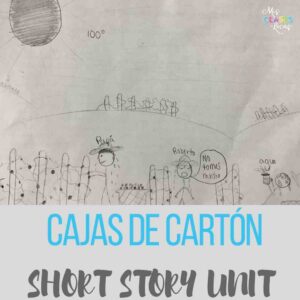 To start the unit we watched the adorable movie McFarland USA in Spanish. It was my first time seeing the movie and the students and I really enjoyed it. We focused our discussion on what it is like for teenagers to work in the fields in California, as to give a base for what it is like for the children in Cajas to work in fields in the 50’s in the exact same area of California. I was actually home with a sick child the day after watching when I planned on doing a lot of discussions, so they were assigned an on-the-fly smash doodle to describe what happened in the movie. The next day, students used these smash doodles to describe to multiple classmates what happened. 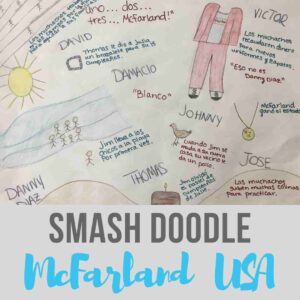 I used the awesome teacher’s guide from Musicuentos to guide our discussion of the authentic short story.  We had many snow days and late starts while reading, so it actually took us a couple of weeks to slowly work through the story together. I started by reading the story to the class, circling and personalizing where needed.

This particular class really enjoys when I read to them, and since they are focused and participate, I oblige, since it means that I know everyone’s comprehension level as we go. In later days I provided the option for students to read on their own if they would like. Midway I gave a short reading comprehension quiz, and you can see a drawing from that quiz above. After finishing, students used these order of events sentence strips in groups to retell what happened in the short story.  There are other ideas of activities in these resources as well.

I have always wanted to find a time to talk about the Postville raid in class. I figured it fit well with the themes of immigration and agrarian work from Cajas, so we expanded our unit with a week on the Postville raid. One of the largest workplace immigration raids in US history happened in 2008 in the small Iowa town of 2000. Postville is very similar in size to the one I teach in and is only a little over an hour away. Also, the detainees were held for months at the National Cattle Congress which is only miles away from where I teach. (The makeshift court that was set up was actually where I had my wedding reception). For something that happened so close to them, most of the students had never even heard about the raid.

They first read this Postville reading in Spanish from Kristy Placido to give some background knowledge. We then watched Abused the Postville Raid as a class, which I rented online for 48 hours. Finally, we discussed the raid and the connection to our community and immigration using some questions from this guide. It really opened up some students’ eyes to events that were so close.

As an interpersonal assessment, we did small group conversation circles. Students just came prepared like a book club meeting and just discussed the book and unit in Spanish. I floated from group to group, listening, or joining in on the conversations. They also completed presentational writing in class, reflecting on what they learned and connecting it to their lives.

Overall I think that the elements of the unit were great on their own, but I need to do a better job in the future of connecting everything together better. In a perfect world, I would have had a great overall unit plan with backward design and planned assessments in advance, but that did not happen. It was a little more fly by the seat of my pants since I have three other preps too. Considering I am still getting up multiple times a night with baby sir eats a lot, I am not at my best right now. (Case in point this post has been in my drafts since early January. Sorry blog). Since my Spanish IV is such a genuinely good group of kids, I can go with the flow with them and do not need every minute structured. Bless them. As always I am learning and growing every day!


Have you taught any of the above? How did it work for you?

Update Here are all posts for Teaching Cajas de Cartón

🌼 The 🎯Día de Muertos display is out 🌼 W

💀 Tierra Incógnita 💀 If you have not seen

It is conference season! Here are open, upcoming,

🎶It’s fall bracket time! 🎶 If you are sta

✨Game changer✨ Starting the school year with u