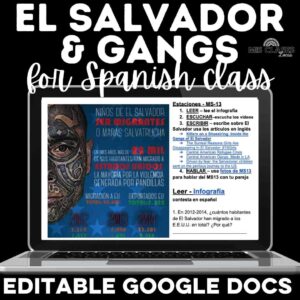 This summer I blogged about Resources for teaching Vida y Muerte en la Mara Salvatrucha. Well now that I am back from maternity leave, I have actually been able to put these hypothetical plans to use for my Spanish IV. I knew I only had nine instructional days (plus the two Fridays of El Internado) before we would be on Thanksgiving break. Instead of splitting up the novel over break, we spent all nine of those days introducing the novel using the rich cultural context of the setting and themes.


How to Introduce Vida y Muerte

You may be thinking, how did you spend NINE days introducing a novel? Well, actually I could have used more. I think one of the biggest mistakes people make when first teaching a novel is not spending enough time introducing it. By spending time in advance exposing students to the country of origin, historical context, and current content with novel-specific vocabulary, actually teaching the novel will go much smoother.

For example, while I was gone students read a novel, but the sub did not have them do the weeks of prep work that I usually do first, which includes watching two movies that set up the foundation for being able to analyze the novel. The students told me they did not understand the novel, and therefore that they did not like it. It makes me so sad that they missed the whole point of an awesome novel because they were not given the foundation on which to properly “get it.” I digress, but here is how I introduced the novel Vida y Muerte en la Mara Salvatrucha from Fluency Matters. Make sure to get the NEW Teacher’s Guide too.

Why watch a film before reading Vida y Muerte

I used to have students watch movies at the end of a unit, but it is so much more powerful to watch one cultural context before reading a book. Since the authentic movies I show are not the same as the books, it is not spoiling the book for students. (Unlike in English class, when watching the movie version will keep students from actually reading the book). We started by watching the movie Voces Inocentes using the awesome guide from Kristy Placido. It is rated R, but I have all students and parents sign a permission slip at the start of the year for both El Internado and movies. Honestly, besides violence, there are just a few swear words. If you are going to teach this movie, make sure to buy the movie packet from Kristy. It is so much more than just a movie guide with all kinds of other resources as well.

Update for teaching the rest of the book – Vida y Muerte Novel Lesson Plans
Have you taught this novel? How do you introduce Vida y Muerte?
« Persona Especial
Why my Classroom Does Not have Desks »